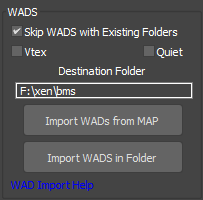 The Material Library Generator 1.6+ allows you to import a WAD files. To properly work, you must first set a valid path for MatGen in your global Wall Worm settings. Your Bin Dir must also include an executable named xwad.exe which is included in most versions of Source.

When this option is checked, WADs will be skipped if there is already a folder name matching the WAD file name in the destination paths.

When on, the function will auto-convert the TGA files into VTF files. This is useful to expedite the transition of Goldsource to Source.

When on, the importer will not prompt for user interaction for each WAD or failed conversions.

This is the root folder for the created assets. The converter will create VMT files in the materials subfolder of this path and TGA files in a materialsrc subfolder in this path.

The WAD conversion functions in the Material Library Generator are:

In both cases, each WAD found will be converted to VMT files and TGA files. Unfortunately, the files will be placed in two separate folders, which you will need to manually merge.

Now that you have the files copied, you can use the Material Library Generator VMT importer to import the materials to libraries. Also, if you import a MAP file with the VMF/Map Importer, you'll find that the materials are now found and imported automatically.

Wall Worm will only import WAD Files if it can find them. When running the functions to import WADS from MAP files, WW will look for the WAD files in the following locations (in ther order of this list). 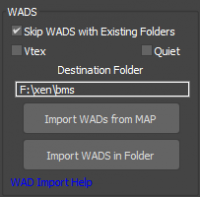 UI for importing WADs in the Material Library Generator.