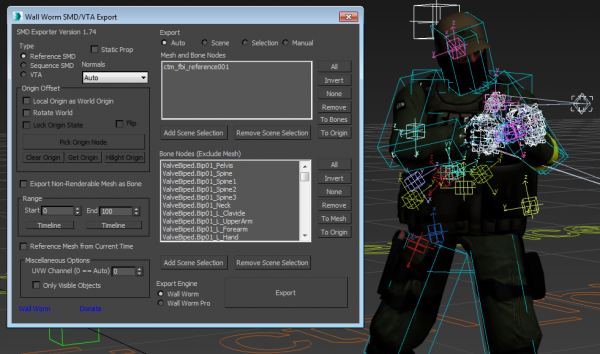 Generally speaking you should use the exporter built into Wall Worm Model Tools and the WWMT helpers; the manual exporter is for people who want to manually write out their QCs or to manually overwrite a DMX/SMD/VTA file created by Wall Worm.

Explanation of the UI

The UI of the SMD Exporter gives you control of the elements that get exported, the state of the mesh to export (frame #), the reference system to use for the bones and vertex positions, what objects to export and UVW channel to use.

This list determines what type of file you are exporting. The types are Reference, Sequence and Flex.

When turned on (requires Wall Worm Pro) the output file type is a DMX file regardless of the type chosen above. When off, the file type is SMD for Reference and Sequence types, and VTA for Flex.

This checkbox lets the exporter know that there are no moving parts. This option is useful when exporting static props.

The origin offset functions are not something that has traditionally been part of exporting SMDs. In the past, all $origin-related calculations were done in the QC file. But when Valve updated the compilers for some of the most recent mods, the $origin command either stopped working or started working differently. For this reason, WW now has the $origin values calculated into the SMDs.

Understanding how these values work is important but will be covered in another document.

Use Local Origin as World Origin

By default, the origin node is the first object that was created in the current scene (if exporting a scene) or first object in the selection (if exporitng selection). More in this below. To see what the current Origin Node is, you can click the Hilight Origin button and the Origin Node will flash. But you can set your own node too.

If the Use Local Origin as World Origin option is not checked, none of the Origin-related functions below have any effect in the export.

Use this button to set the Origin Node manually. This is important to do if you want a set of models that are separate to export in the same reference system. For example, if you want to export three bodygroups SMDs along with a main SMD, you need to make sure that all of the exported SMD files are using the same node (either geometry or bone) as the Origin Node.

This button will force the Origin Node to flash briefly in the viewport. Note that if the Origin Node isn't within the current viewport display region, you won't see the node flash.

This checkbox will tell the exporter to exclude the creation of face/vertex data for all objects in the export that are non-renderable. This is useful when using objects as bones that are not properly denoted as bones inside Max internally (like when using CAT bones in some versions of Max). Understanding this setting can help you avoid situations where your exported model has no faces.

The range spinners determine the state of the exported meshes (for Refence Mesh) and bones (for all types of exports).

This spinner controls the frame to use when exporting a Reference SMD (unless you have checked the Ref from Current Time checkbox). It also sets the start frame to use for Sequence and VTA exports.

This checkbox will tell the exporter to use the current frame in the timeline when exporting a Reference SMD. It will override the Start frame setting.

This option determines what gets exported. The options are Auto, Scene and Selection. How they work are explained below.

The UI for WW 2.4+ has an interface to control what nodes will export as both meshes and bones and what nodes export only as bones. The lists are prefilled when the UI is opened based on the Auto rules.

When in manual mode, you can add and remove items from a list with the buttons around the listboxes.

By default, the only available engine is Wall Worm. But if you own Wall Worm Pro, you can use that engine which is much faster when exporting models with Skin modifiers or when using Explicit Normals.

Run the export and save to file.

This spinner controls what UVW channel to use when exporting UVW information. The default value is determined by the global setting for UVW in WW (which itself defaults to 1).

Only include visible objects in the auto-detection and scene settings.

Check this option if exporting a SMD file and it is for the Goldsrc engine.