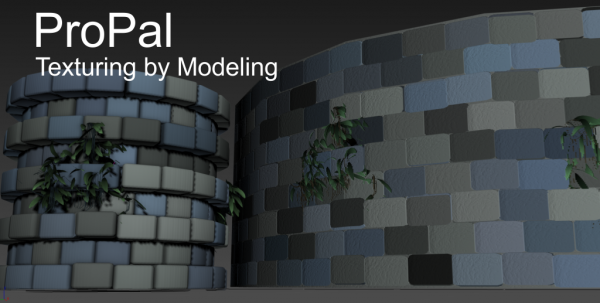 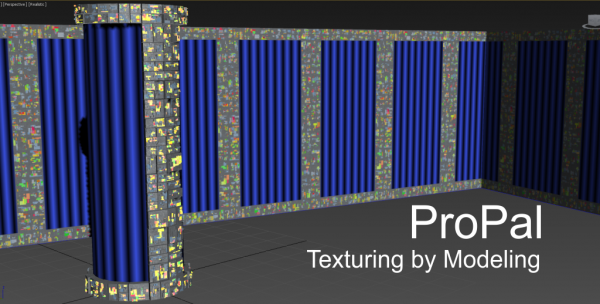 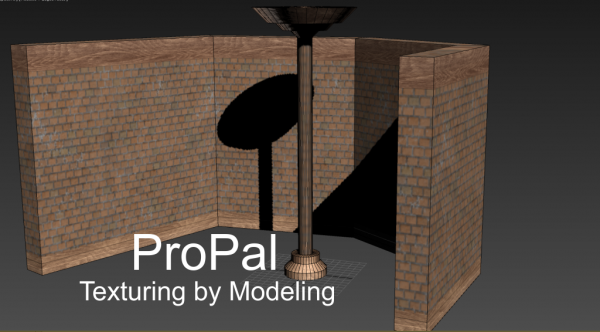 ProPal is a new plugin to speed up texturing projects. The primary purpose is to quickly convert modeled geometry into seamlessly tiling textures. It reduces the amount of clicks necessary when baking geometry to textures with Render to Texture (RTT). ProPal is a toolset for baking textures and geometry quickly and in a way that always tiles in either U or V. Now also part of ProPal is ProPalBoard, a toolset to quickly convert arbitrary views of the current scene into a single texture sheet with a few clicks; ProPalBoard was primarily designed to turn complex foliage models (or collections of such models) into optimizes billboards.

ProPal is composed of two new Geometry Classes called ProPal and ProPalBoard, and a Custom Attribute that is used with Projection modifiers. When set up, many of the attributes that you'd need to set up multiple times in the RTT UI are controlled by single parameters. For example, the bitmap dimensions are controlled by changing the dimensions simply in the ProPal UI and not per each render element in RTT. In all the examples in the above slideshow, the RTT Process was as simple as selecting the modeled geometry, running a function to create a ProPal object around the selection, then pressing the Render to Texture button in ProPal.

ProPal is not for every type of RTT Projection. It is for those that need to be projected onto a cylindrical target where the texture will tile seamlessly in U (like a building facade with moulding) or V (like a ladder). For creating sprite sheets, use ProPalBoard instead (lower in page).

These parameters control the geometry of the ProPal object.

This is the local axis used for setting the direction of the height. By default this is set to the Z axis.

This is the height of the ProPal geometry from it's pivot. The height will extend into the direction of the axis used.

The > button next to height will set the height such that it will match the current circumference of the ProPal object based on the radius setting.

This parameter controls the radius of the ProPal object.

The > button next to the radius will set the radius such that the resulting circumference of the ProPal object will match the current height.

The radius multipliers will force the x/y radius to expand/contract in the respective radius. The values default to 1 and create a circular shape. When not equal, the shape will become oval.

Set the number of hieght segments in the ProPal object.

Set the number of sides in the ProPal object.

These settings control the InodeBakeProjProperties properties of the ProPal node. They are identical to those in the Projection floater inside the RTT Menu. To access all of the parameters, you need to use the standard RTT dialog.

Get Settings From Node

When pressed, the settings are collected from the node's InodeBakeProjProperties. This might be necessary if you opened the RTT Projection UI and changed a setting.

See the Max documentation on this setting.

See the Max documentation on this setting.

Add a projection modifier to this ProPal and apply the ProPal Connection custom attribute to it.

When the Lock option is on, this controls the ratio of the Width to Height in the resulting bitmaps.

When on, locks the height of the bitmaps to a value determined by the Width divided by the Ratio.

The width of the bitmaps rendered.

The height of the rendered bitmap.

These are the elements that you can render out. Note that some have extra checkboxes that relate to their special settings such as shadows, etc.

While all elements will get rendered to file, not all will end up in the automatically generated material because there may not be a specific map slot for that element such as the Blend element.

Set the foler where the files will render to. By default this is #sceneassets/images/propal .

Press this button to start rendering to texture immediately. Note that this will not bring up the RTT dialog. If you need to tweak the RTT settings, open the RTT dialog as usual in Max (Press 0 on the keyboard).

Match All is identical to Match Height except that it also tries to match the radius to encompass the nodes.

ProPalBoard is a geometry class for creating multiple projections of arbitrary objects directly into a sprite sheet or texture atlas. This geometry class is included with ProPal.

This macroscript will create a propalboard node using the selected objects. Each object will be added to the ProPalBoard's Projection Reference Geometry. If there are helpers in the selection, those helpers will become the source points for the ProPalBoard; if there are no helpers, each of the geometry will be used instead.

To use the Create ProPal Around Selection function, you must add it to your menus or buttons with the Customize > Customize User Interface menu and look in the wallworm.com category.