Carver is an enhanced carving tool similar to the Carve tool in Hammer--but far more advanced. This tool allows you to use one or more cutter objects to carve into one or more other objects. Unlike the Boolean functions in Max (ProBoolean) this will create multiple independent blocks or sealed elements. If the original block is convex, all pieces will be convex as well.

There are several functions in Carver: Carve and Make Hollow that replicate some functions found in Hammer. The included Bounding Cull Modifier (for Max 2016+ only) allows you to slice off geometry by the bounding box of another object in the scene. There are also some other utility functions such as Fix Coplanar (removing edges between adjacent/coplanar faces to merge them into a single polygon); Remove Isolated Edge Verts to remove vertices used by less than three edges (for convex objects with no borders or open edges); Select Planar Objects; Explode and Combine. Finally, there are functions for optimizng boolean actions that add extra culling functionality to Wall Worm's Convert Scene to Model utility.

For the carve function, you must add both Carve and Carvee objects. The Carve objects will cut into the Carvee objects. You have options for keeping or deleting the union sections, as well as grouping or collapsing the resulting blocks and unions.

The general workflow for carving is:

When on (default = on) then all objects in the Carvee list are deleted at the end of the Carve process. When left off, the original carvee objects remain in the scene and overlap with the carved pieces.

When on (default = off) then all objects in the Carver list are deleted at the end of the Carve process.

This menu determines the point in time to make a carve. For carver/carvee sets that are not animated, this setting does nothing. However, for animated sets, it will determine the time of carve.

This menu determines what to do with union blocks (those blocks resulting from the space shared by both carvers and carvees.

This menu determines what to do with the blocks at the end.

When on (default = off) then all polygons resulting from a carve will get a UVW modifier applied to them to make the polygon planar. This fixes skewed UVs on such faces because the default Cap() function in MAXScript does not apply planar mapping to the polygon. Unfortunately, the UV will still not flow with the UV transform and this option slows down the carve.

When on (default = off) then all resulting blocks that do not touch the original carver space will be delete from the results. This option is especially useful with the Make Hollow function (below).

The Make Hollow function allows you to turn convex objects into hollow objects (similiar to using the Shell Modifier). The results will be a collection of convex blocks usable in a game engine. 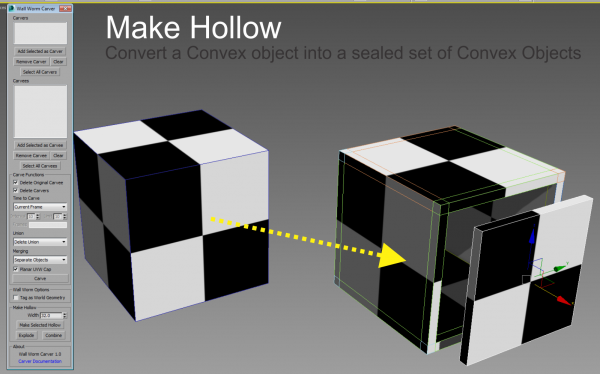 The Carver Utilities include several functions that are useful for dealing with objects that need to be utilised for BSP level design.

Press this button to detach each element of each selected object into a new separate object. The original node is deleted. Each new node has a pivot point at its center.

Combine is the opposite of explode. Each object in the selection is attached as an element of the resulting object. The center of the original objects becomes the new pivot point.

This function will filter the current selection (or all objects if none are currently selected) to those that are planar. Good for finding this kind of invalid world geometry.

This function will remove edges between coplanar polygons in all editable poly objects in the current selection. Adjacent, coplanar faces are merged into a single Polygon. Useful for converting triangulated meshes objects into clean world geometry.

This function will remove all vertices from the selected editable poly objects where the vertex has less than three edges. This function presumes your object(s) have no non-planar polygons. (If your geometry is composed of non-planar polygons, you can fix them with the Break Non Planar Faces on Selection function found in Anvil's Brush Functions Rollout in the Miscellaneous tab. Anvil is not part of Carver, but is part of the free Wall Worm tools.) You should only use this function on sealed objects (no borders).

To install Carver, copy the carving_tools.mse to your 3ds Max scripts/startup folder. Then click MAXScript > Run Script... and browse for the file. Then copy the LaunchCarver.mcr to your macroscripts folder (if you do not use Wall Worm). There will now be a category in your Customize menus called "wallworm.com". You can then add a menu or button with the Wall Worm Carver function.

(Also, in the latest versions of Wall Worm, you'll find a menu to launch this tool under Wall Worm > Wall Worm Level Design > Wall Worm Carver. If you have Wall Worm installed, it is not necessary to copy the LaunchCarver.mcr file to your macroscripts folder.)