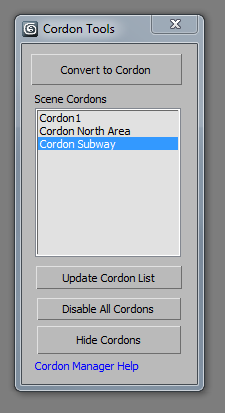 The Cordon Manager allows you to create and reuse multiple cordons for your level.

Cordons are compile boundaries that let you compile and focus on specific areas of your map. By setting a cordon, you can compile only the area within the cordon.

Wall Worm lets you have multiple cordons. Although in some mods only one cordon can be actively used at a time, you can save all cordons and reuse them later by changing thier active state. This makes it easer to manage the testing of different areas of your map.

Any object can be used to create a cordon.

Select the object that you want to be a cordon (or multiple objects that represent different cordons) and press the Convert to Cordon button. A non-renderable Box is created to match the bounding of the object(s) and only displays as a box. The bounding box of the cordon boxes is the cordon.

The Cordonsolid Tags group was added to allow tagging brushes as cordonsolids. It's another way of blocking off areas of your level. Instead of just compiling the area inside like with a normal cordon, this will place export a brush to clip away things inside. The same effect could be used by using any standard brush (like a sky or nodraw brush), but has the benefit of being invisible if viewed in Hammer.