PropLine is a parametric spacing tool that allows you to distribute props along splines in your scene. In some ways it is similar to the Spacing Tool built into 3ds Max, but it offers far more control and is non-destructive. Installing PropLine adds a new geometry primitive to Max named PropLine. PropLine is now bundled with Wall Worm.

Get PropLine with Wall Worm Now

The main settings for PropLine are in the Parameters Rollout. You can further control translations and rotations (including randomization of these) in the Transformations rollout.

This setting controls how the props are distributed along the splines.

* Knot, Spacing, Size and Divide only work on Line/Editable Spline shapes. All other shapes can only use Interpolation. When set to anything other than interpolation, those splines that don't support the current method will use interpolation instead.

This setting is only active when the Prop Distribution Method is set to Spacing. It controls the distance between each prop.

This setting is only active when the Prop Distribution Method is set to Size. It controls extra spacing between each prop.

This menu controls the ordering of the props.

When off, tries to force the sequence of props to not repeat when using Random or Probability. Has no effect when using List Order distribution. Also is not honored if there are two or less props being used. This setting can work with, but is not effective with, Probability Distribution. Most suited for the Random distribution.

The group of buttons controls the splines that are used in the PropLine.

This group of buttons control the Source Geometry (props) to be used in the PropLine and to control the per-prop transformation overrides.

The odds that any particular prop point will be skipped and left empty. 0 = no prop skipping. 100 = all props are skipped.

Choose the Axis that will Point towards the direction of the spline vectors. Default is X.

Point the prop in the opposite direction.

When on, the prop will default to use a X vector that is parallel with the World XY plane. This forces the prop to point upwards with default transformations.

These spinners control the X/Y/Z offsets (positions) of the props. If the checkbox is unchecked, all props will offset by the same amount in each axis. If you check the checkbox, the second spinner for each axis activates to set a range. Now each prop will be randomly offset between the Min/Max values of the two spinners in that axis.

These spinners control the X/Y/Z orientation (rotation) of the props. If the checkbox is unchecked, all props will rotate by the same amount in each axis. If you check the checkbox, the second spinner for each axis activates to set a range. Now each prop will be randomly rotated between the Min/Max values of the two spinners in that axis.

Press this button to pick another PropLine in the scene and get it's transformation settings.

Launch the PropLine prop manager to override transformation settings on a per-prop basis..

When on, the PropLine geometry updates whenever you change a setting or the underlying splines/geometry. When off, only updates when you click the Update button. When you are done manipulating PropLine, you should turn off AutoUpdate to increase performance in the scene.

This drop-down lets you select the prefered LOD level of props of the WallWormMDL class. This setting is only relative to that geometry class which comes with Wall Worm and Wall Worm Pro. The available modes are Lowest LOD (lowest resolution model), Per Node (use the WallWormMDL node's current LOD setting) and Collision Hull (the hull of the model if present, otherwise lowest LOD).

When on, each prop will only be represented in the viewport as a box.

When on, each prop be displayed as a box based on the node's own Display As Box object property (or it's layer's Display As Box setting if the node is using Display By Layer). Note that this function has a refresh issue such that changes to object/layer Box Mode settings won't take affect in the PropLine until the PropLine has been deselected and then reselected.

When on, the PropLine geometry will update to force XRef Geometry sources to use the Proxy geometry if the object has a proxy.

When on, props will abruptly end once this number has been exceeded. Default is 1024.

When on, the the minimum distance between two props is this value. The default is 4.

Set this PropLine to export as a collection of brushes in the VMF exporter.

Set this PropLine to export as a collection of func_detaul brush entities in the VMF exporter.

Set this PropLine to export as a 3D Skybox object.

Below are some known issues when working with PropLine objects.

PropLine is Slow or Hangs Max

This issue is a problem whenever the PropLine is creating too much geometry. Causes can include high-poly source geometry; very small spacing values; very large numbers of splines controlling the PropLine.

Solutions to this problem vary depending on case-to-case. Using display as Boxes is one method of increasing performance. Look at the Performance options.

This bug is a problem with recomputing the mesh normals. If you experience this problem, the easiest solution is to add an Edit Normals modifier onto the PropLine. 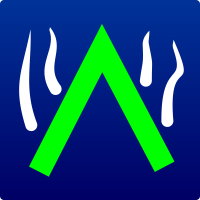