The Visgroup Manager added to WW 3.844 is a tool to allow you to arbitrarily show/hide objects in a manner reminiscent of the Visgroups in Hammer. Visgroups are in some ways similar to layers in Max, but they are not the same thing. Like layers, visgroups allow organizing the scene. Unlike layers where objects can only be a member of a single layer, with visgroups objects can be assgined to any number of visgroups.

The initial version of the Visgroup Manager is detailed below. 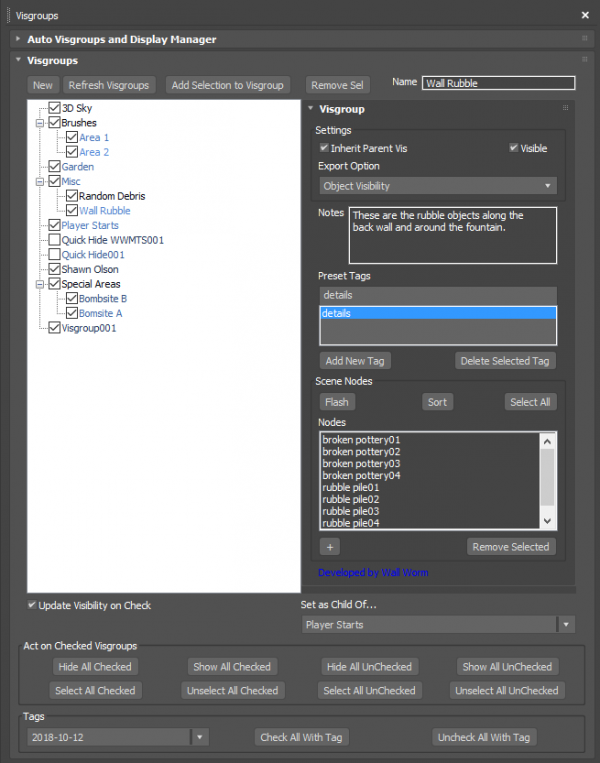 You can create visgroups from any selection of objects at any time. To create a new visgroup, simply select a set of objects in the scene and click the New button in the Visgroup Manager. There are also some macros you can bind to keyboard shortcuts or buttons which you can find in the wallworm.com category of the Customize > Customize User Interface floater.

Visgroup hierarchy is determined by the actual hierarchy of visgroups in the scene (as Visgroups are stored as actual nodes in a special hidden layer called Visgroup Control Layer that is a child layer of the WallWormUtilityLayer).

To change hierarchy in the Visgroup Manager you must select the layer that you want to move up/down in the hierarchy of Visgroups.

In Wall Worm, visgroups have more settings than just visible/hidden. Instead, they have several extra settings to help manage the scene.

When on, this visgroup's nodes will change visible/hidden state whenever the Visible state of an unbroken chain of ancestor visgroups is changed. For example, if the parent visgroup turns off the Visible setting, the object's in this visgroup will become hidden. The chain will not continue when one of the nodes has this option turned off.

When this setting is changed, the nodes belonging to the visgroup will either become visible or invisible based on the setting. ALso, any child visgroups that have Inherit Parent Vis will have their nodes (and further matching child visgroups' nodes) match this visible setting.

This setting will enforce the exported VMF to set the objects in the visgroups to the visibility state defined by this rule. This allows teams to enforece object visibility in the VMF for Hammer usage independent of the current state inside Max.

This field is simply to describe the purpose of the Visgroup.

Preset Tags are simply arbirary tags that you can apply to visgroups. These tags can then be used to hide/unhide visgroups by their tags (see the Tags section of the Visgroup Manager).

Press this button to update the visgroup list. You might do this because you have created new visgroups with a keyboard shortcut and the new visgroups aren't yet listed in the manager.

Adds the current scene selection from the currently selected visgroup.

Removes any objects in current scene selection from the currently selected visgroup.

When on, checking/unchecking visgroups in the list will show/hide them immediately in the viewport.

This list of functions is useful for selecting or deselecting objects based on visgroups. Note that the Hide/Show functions are already automated when the Update Visibility on Checked is turned on.

This section will list all the tags that are included in the object in the visgroups. It will allow you to check/uncheck all the visgroups based on matching tags.

Some functions will automatically generate tags. For example, the macros listed above will always give tags like the current date (like 2018-10-12), Quick Hide, etc.

There are several tools in Wall Worm that will automatically generate visgroups. Those tools include:

By default these functions will create visgroups to let you know what has been imported into the scene, etc. Also, these auto tags will often include the date.

Auto-Visgroups are those that are automatcially generated by the system. These groups cannot be created manually and include things like World Geometry, Displacements, Tools and more. In WW Free, these are limited to hard-coded visgroups in WW. When WW Pro is installed, the system will also generate visgroups from the FGD.

Auto Visgroups are located under the Auto node in the visgroup list.

The User Visgroup is a visgroup that is not turned on by default. Two different global settings must be set in order for this visgroup to take effect. When on, each object added to the scene will be added to a visgroup that is unique to the name of the user working in Max. This is helpful when working in teams and allows the team to sort objects based on who created the object.

To turn this function on:

Some users have reported that the automatic user visgroup function requires a Max restart to take full effect.

At time when you import a VMF, the Visgroups will come into the Max scene as both Visgroups and as Layers.