A great opportunity opened up to me recently when Robert Briscoe contacted me. I knew of Robert's work long before I knew of him directly. My personal Counter-Strike group had long played his level de_forest. Also, my friend Gulliver Thoday worked on fixing de_forest when an update to Source broke many custom levels, and Gulli then introduced me to the connection of Robert and the acclaimed game Dear Esther.

To be honest, I hadn't played Dear Esther when Robert commissioned me to build some new tools into Wall Worm. But that soon changed... and I'll share my impression below.

Dear Esther is famous for the visual atmosphere and setting, among other things. There has been criticism from many that the game is not so much a game, which is a fair assessment. It is certainly unique and beautiful... more story than game. So anyone who bought the game expecting some scary monster bosses may have been disappointed.

I, for one, was mesmerized with the game.

Some of the really amazing aspects of Dear Esther are not really appreciable to average players who do not have a lot of experience developing for the Source Game Engine. Source has always had a bad reputation of being blocky. Moreover, the lighting/texturing on models has not always been easy to cheer about—especially with default compiling options. And one type of model in particular—prop_details—has been notorious for horrible lighting problems. Dear Esther is simply an insult slapped in the face of all those criticisms, as every single professed visual flaw in Source was simply ignored. I guess Robert skipped the lesson on how much you can't use Source for beautiful things.

One person wrote this in 2011: “Every time I visit Briscoes site I get a massive Game Art Boner. The things he does with the source engine are magical, no man should be able to bend such an uncooperative engine to his will like this!”

It's now the end of 2013 and when I recently played Dear Esther for the first time, the same amazement is there. Even though there are now even newer iterations of Source with some nice lighting enhancements like CS:GO, etc, Dear Esther is still stunning.

A huge percentage of Dear Esther's beauty and realism is in the foliage and plants—primarily composed of detail props that, as mentioned above, are traditionally equated with bad lighting. From what I understand, the code for lighting these models was modified in Dear Esther from the default behavior to one fitting the atmosphere. However it was done, it was beautiful.

Which brings me to the first new tool in Wall Worm funded by Rob: the VBSP Importer. Rob wanted a way to visualize inside 3ds Max the detail props that were generated in Hammer and Source. So he hired me to build this tool. As such, you now you can import the rules from a VBSP file and scatter detail props across the displacements in 3ds Max. 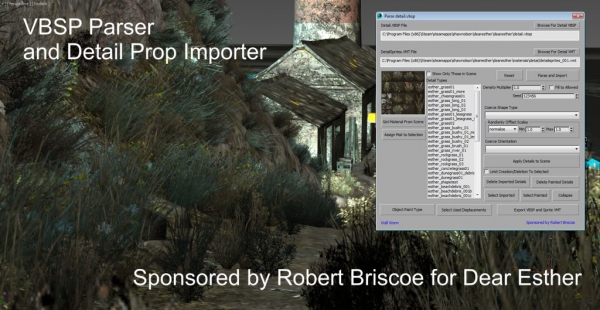 During the process we came to some of the limitations in the (then) current generation of the VMF Importer that I had sitting on the Wall Worm shelf. There were instances where imported geometry was missing, corrupt and/or had bad UVW. And since this was not a big priority of mine (as many of you may have noticed when I've repeatedly declined import enhancement requests), I wasn't really expecting to do much more on it than help manually clean up the errors when necessary. But, as it turned out, this was an important ability for Rob—so he commissioned me to finish the VMF importer--which now imports all materials, models and correct geometry.

And now there are two new tools in Wall Worm that all of you get to use that are only there because someone paid for them. So please make sure to send some thanks to Rob, especially if you use one of these two tools. And remember this story when you have an awesome new idea but I'm not keen on working on it—money is a powerful motivator.

While working on the VMF/VBSP importers and bringing in the levels from Dear Esther to 3ds Max, I was completely amazed at how much time and effort must have gone into the making of that game. One of the downsides of Source before Wall Worm was that you could not build models in place—you'd have to make them in Max/Blender/XSI/Maya and then place them in your level in Hammer. If the dimensions were wrong... or a piece need realigned somehow, it's a constant back and forth. For small projects that is endurable. But the scale of this in Dear Esther is mind-blowing. I cannot wrap my mind around the obsessive dedication to detail it must have taken to have done this in DE with Hammer! Opening some levels for DE in Hammer takes my computer 10 minutes—just to open!

Ironically, I still can't get many people to understand the value of building levels in 3ds Max instead of Hammer. There really is a psychological barrier in the community that reacts wildly negative to anyone who hints at making any levels for Source outside of Hammer.

I can tell you with absolute certainty that making levels at the quality of Dear Esther is more simple in programs like 3ds Max than in Hammer—and certainly don't take as much time. It's too bad that I didn't get involved with Wall Worm earlier... maybe I could have convinced Rob to use Max instead back when DE was under development!

The time I spent building the VBSP importer got my brain stirring about something I'd been thinking about for a while now... making a VBSP exporter that works with the Wall Worm displacements and VMF Exporter. So I sat down and wrote a new set of tools to do just this.

Although the VBSP Exporter itself is built into Wall Worm, it only works with a new set of geometry types. To try and offset the time involved, I opted to make Detailer a commercial plugin. 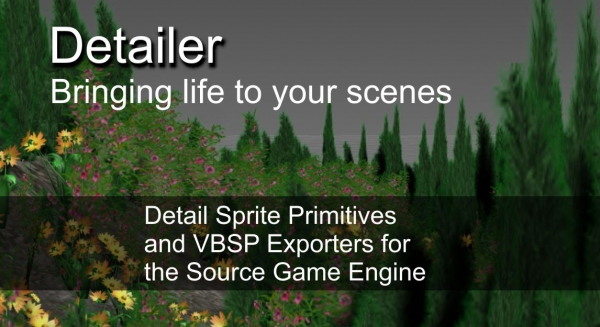 After all the years of providing free tools, information and support, I really expected a better reaction to the release of Detailer. But when I promoted it in the forums, I did not get the reaction I was hoping for and expecting. Most WW users seemed to ignore the news... but I'm often accustomed to that. The most demoralizing thing was that the primary reaction was kind of negative—and several people asked me if this was the end of my time developing Wall Worm and free tools!

So to be quite clear: No, I have not stopped developing Wall Worm, nor do I have any intentions to stop. To be honest, I'm quite addicted to learning new ways to solve problems in Max, and Wall Worm is one of my most proud, ongoing accomplishments. I expect I will still be tinkering with it even after Source becomes defunct!

At the same time, users need to understand that it takes a lot of time to build these kinds of tools. There is time building code, researching methods and formulas, testing, releasing, documenting. I have a family and mortgage too. Building some new complimentary commercial tools helps justify all the time I do spend doing this.

I understand the feeling of paranoia that can go to software development. I recently shared some of my own frustrations with software developers trying to squeeze the artist with a call to Boycott Adobe. At the same time, I'm simply trying to make ends meet!

So I have to say I was actually a little depressed with the response, especially since Detailer helps optimize and simplify a task for Source. But then I thought about it, and realized that the majority of the Wall Worm users are modelers, not mappers; that even most mappers have never made their own custom VBSP to begin with; that most people might not see the value.

Which led me to go ahead with the next commercial plugin, that actually has had several sales now: CorVex. 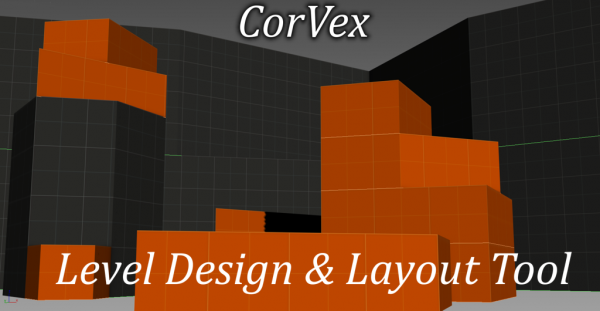 CorVex is a geometry primitive that has a hybrid approach to making geometry—similar to using Extrude on splines but with a focus on level design and layout. It has planar mapping controls important for world geometry.

CorVex user Dave Brennan had this to say about CorVex:

“This plugin makes creating complex brushes inside Max easier than ever. It's getting to a point where you don't really need to go into Hammer.

“Rapid prototyping and blocking out of levels is easy and quick with this.

“And the auto UVW mapping makes things so much easier.”

The positive reaction to CorVex does make me feel better than the release of Detailer. It also has invigorated me to move forward with some other plugins. At least one upcoming plugin (and hopefully more) are in collaboration with popular Max developer John Martini.

Since the last newsletter went out, I've been very active in adding new features to Wall Worm. Some of the things that were on my radar for a long time are now behind me: the VMF Exporter now has complete support for any UVW and even texture coordinate offsets. If you are not sure what that means... it's OK, as I'll share a video on taking advantage of that in the near future.

In a way, Wall Worm can think of 2013 as the year of the importer and exporter. As I moved to mapping for CS:GO last year, I found changes in some of the compiling that forced me to update the SMD Exporter in Wall Worm. Soon followed the donation of SMD Import code. The VMF Exporter finally got finished. There is now even a complete VMF and MAP importer; as mentioned above, VBSP importers and exporters; a VMT importer in the Wall Worm menu...

More and more importers and exporters!

Here is one user who is taking advantage of Wall Worm: Joris Ceoen recently won first place in a GameBanana mapping contest with de_himeji_castle. He talked about it on the Wall Worm Forums here. 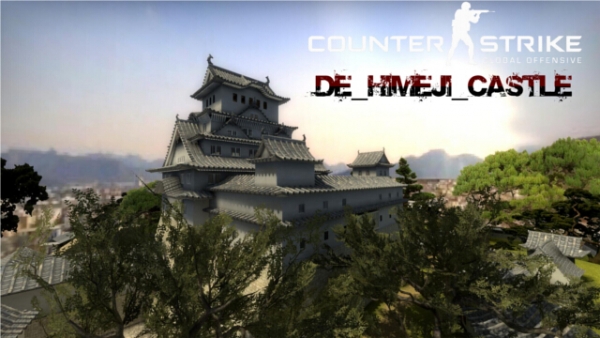 Sorry for the long-winded post. I just can't stop talking when it comes to Max, Source and Wall Worm! Happy Holidays! Stay creative.