Most of the time when you create a model inside 3ds Max and export into Source, the smoothing matches exactly how it looks inside the 3ds Max viewport. However, there are situations where models will export with no smoothing between faces. This article will explain how and why this happens along with solutions.

The standard way to smooth faces in 3ds Max is to use Smoothing Groups. Smoothing groups are applied to Face/Polygons. Any two faces sharing an edge will smooth if they happen to share a smoothing group--whereas faces that have no shared smoothing groups or shared edges will not smooth. 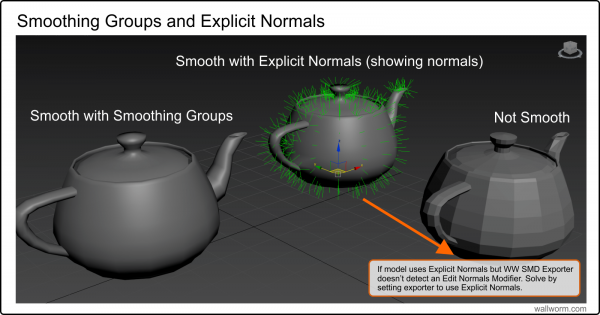 The SMD Exporter in Wall Worm has three modes:

The default mode is Automatic. The modes are explained below.

Automatic: If the mesh has an Edit Normals Modifier applied to it then Explicit Normals are used; if no Edit Normals modifier is on the mesh, face smoothing is used.

Face Render Normals: Normals are derived from the smoothing groups.

Explicit Normals: The explicit normals and smoothing groups are used.

Using Explicit Normals option will always produce correct results. However, this is not the default setting because the functions to read explicit normals are slow in MAXScript, which is what the free version of Wall Worm uses to read normals.

There are two local controls for the normals mode in Wall Worm: The Wall Worm Model Tools (WWMT) Floater and the SMD Exporter. Both are drop-down menus labeled Normals. In the WWMT Floater, this is in the Model & Basic QC rollout above the Export QC+Model button. In the SMD Exporter, it's in the top-left section of the SMD Exporter UI.

You can choose a default normal mode in the global setting that will be applied to all new WWMT Helpers and the SMD Exporter.

When you change the normal mode preference globally, it will not change currently existing WWMT Helpers.

Tips on when to set the global preference to Explicit Normals

Resources on Smoothing and Normals