The RES Maker will create a text file listing assets in the level so that servers running your maps will allow users to download custom assets. This is an alternative method to the Asset PaK function in the VMF Exporter. 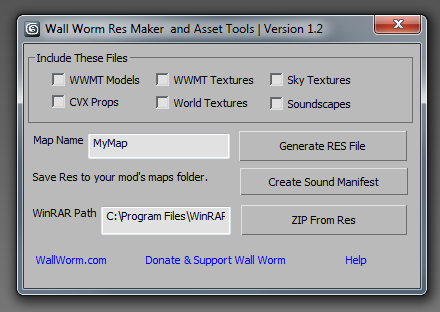 After generated, you can edit the file.

The Res Maker will also automatically include the following files if detected. Note that this function is dependant on having either set up the Game Info Dir in the WW settings or having the appropriate mod selected in Source SDK. Some files listed are generic, some relate to specific mods, and some relate to Source or Goldsource.

In this list, the mapname is used to denote the name of your map. All items are relative to the mod directory.

*This list of assets is the automaticly detected items for both the RES maker and the BSP Pak functions in the VMF Exporter. Those with an asterisk are only added to the RES and not to the PAK.

λ These are files checked if the Engine setting in WW is set to Goldsource.

The Res generator will look for a file named MAPNAME_files.txt alongside the VMF that should simply contain a list of relative file paths to files to add to RES and PAKs. Each line should contain a relative file path to the asset in the game folder. If found while making a res file or PAK, the file will get inserted into the RES. Use this file to inject assets that may not be known to Wall Worm.

The RES generator lets you choose groups of objects to include. Here is how they work:

This option will make the RES collector find all WWMT helpers in the scene and collect these files, if found on disk:

This option will look for any materials and bitmaps used in the WWMT models in the scene. Here are the files it will collect:

This will find all the skybox textures in the scene that are associated to a Sky Writer helper.

This function will collect MDL, VMT, WAV and MP3 files that are listed in any Wall Worm entities or Convexity Entities in the scene.

This will collect VMT and VTF files that belong to brush, decal and displacement objects in the scene.

This will parse the soundscape that is associated with this level (scripts/soundscapes_mapname.txt) and get all the WAV/MP3 files listed in the soundscape file.

This button will find all the sounds in the file (in the soundscape or in Convexity Entities like ambient_generic) and create a sound manifest at maps/soundcache/mapname.manifest.

This function will let you browse for a RES file and generate a ZIP file from that RES. All assets listed in the RES file will get archived into a ZIP file at maps/mapname.zip . You must have WinRAR installed for this function to work.

Maps that have custom assets that are not packed into the map (via BSPZip) must use a RES file to push this content.