Note that these docs are for Wall Worm 2.4+. Importing via QC/SMD is no longer the preferred way of importing models into Max. You should utilize the MDL Importer if you have access to the MDL file (inside the game VPK or direct MDL files) and if the MDL importer supports the features you need.

You can import SMD, VTA and QC files directly into 3ds Max with Wall Worm. SMD files are used by the Source Engine to explain bone positions and faces of the model mesh. Wall Worm generates them to send to Source when you export a model. You can also generate them with third party model decompilers. You can also sometimes find source SMDs included as examples with various Source SDK content folders.

If you need to get a model from Source into 3ds Max, you must first generate the SMD (and/or QC) files. Once you have done this, you can run the SMD/QC Importer.

If you just need to get a model into Source as a starting point or for reference, you can simply import the SMD. Click Wall Worm > Wall Worm Importers > SMD and QC Importer. Now browse for the SMD or VTA file. The model will be rebuilt in 3ds Max.

Importing a Complete Model from QC

If you want to import a model, along with its collision hull and LODs (level of detail models) as well as some model settings, you should import the QC file. To import the QC, do the same thing as importing an SMD except that you should change the Files of Type menu in the import dialog from SMD to QC. This will let you import a QC. The following items are currently supported when importing a QC:

Many other parameters will get copied to the custom QCI file that WW always includes when exporting a model. 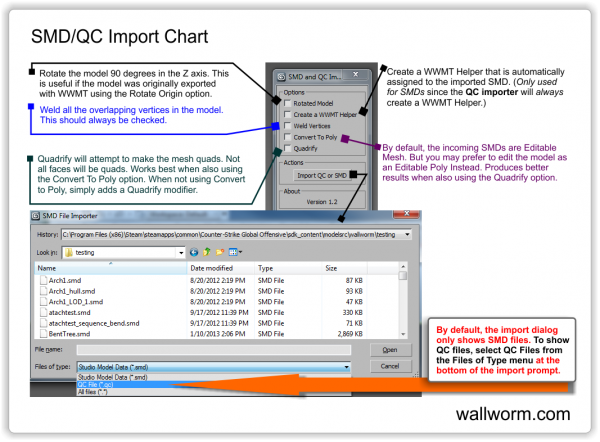 The importers will also create materials for your models. But in order for this to work, the following conditions must be met:

This series covers the steps needed to re-use Source assets inside of 3ds Max.